This article stands on its own, but is also a continuation and solution of working towards a solution to fix a weakness found in the WordPress Kahuna theme, where there is a setting allowing the WordPress Featured Image function to assign the Featured Image to also be used as a post banner / header image. Using the same image for both locations has the benefit of allowing each Post or Page to have a unique banner, but the weakness of trying to use the same image in both a squarish and a very horizontal locations.

The previous post explored both the problems caused by using the Featured Image as a banner, and reviewed whether Kahuna settings or CSS could be used to overcome the problem.

This article explores the possibilities of using a separate image from the Featured Image. Since there is only one Featured Image in the WordPress default, we need to add a new structure that will attach an image to a Post that will only be used for the banner.

I found that it’s difficult to search for a banner image plugin in WordPress.org. The search function brings up mostly irrelevant results when you search for “banner image”. But, I did find three plugins:

The Dashboard interface for this plugin is not intuitive, and it seems that you need the premium version to do much with it. It took me quite a few attempts to figure out how to use it. First, it doesn’t create its own menu item at the main level, but puts the menu item in Settings. When you go to the first page/tab, it’s not obvious that Menu – Top Navigation is actually a link. Their UI is faulty. 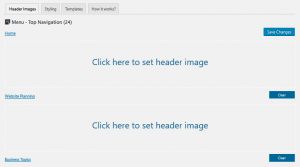 If you figure out to click “Menu – Top Navigation”, you see that you can attach a banner image to each of the menu items.

The weakness here is that you might not have every Post and Page on your site listed in a menu. You may be relying on Category (archive) pages to lead to the individual Posts and Pages. That would mean that anything not in a specific menu could not have a unique banner image. There was a request in the forum for further functionality, but I’m not sure that the core architecture is expandable without a lot of duct tape and baling twine. 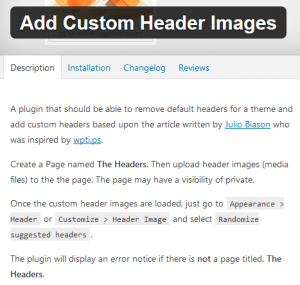 This one looks dangerous! Based, on the Description, it actually removes the theme’s default headers. Instead, it should override them. That is, the basic theme functionality should remain intact, allowing you to restore the site to the way it was if you decide that the plugin doesn’t do what you want.

Either way, this plugin does not seem to allow me to choose a separate image for each Post/Page that will illustrate that topic.

This plugin is very up-front in saying, “You mu 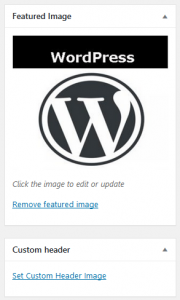 st use a theme which utilizes the built-in custom header functionality of WordPress. If your theme implement it’s own header functionality, then this plugin will not work with it.” This statement covers a couple of important principles. One is that the closer to the WordPress core a theme or plugin is, the more likely it is to be compatible with other themes or plugins. That is one of the weaknesses in many framework themes: they by-pass the WordPress core functionality. WordPress provides a way to replace or add to a core function in the functions.php file of a child theme. The warning is saying that if your theme overrides the header function, the plugin may not be able to override it too.

We can find out whether that statement applies to the Kahuna theme by installing the plugin and testing. The plugin adds a new entry box for the Custom Header. But, when I added a Custom Header, it didn’t change the page. So, the Kahuha theme does its own override of the WordPress core function.

Now the question is, if I set a Custom Header in the panel created by the plugin, will it override the default banner image? The answer is Yes. So, that means that if you

Because it may take some time to gather enough images of the banner size, it is a good idea to have one image that is default, as the Kahuna default may not fit your topic. You can change the default image in Appearance -> Customize -> Site Identity -> Header Media.