Branding Should Grow and Change with your Business - Montana Webmaster

Branding Should Grow and Change with your Business

The idea of building a business started around 1999 when people called for help because I was teaching basic Computer Literacy at Flathead Valley Community College, which is a great school, by the way. The “Gentle Start in Computer” classes were for the general public.  They came about as I watched so many people struggle with skills like using a mouse. Too many of them had been taught with the “click here, click here … now I disappear” method. Computer Gal was a perfect brand for a business providing computer training.

By 2002, I was also teaching similar classes for Adult Education in Missoula and classes for UM that were more specialized. The brand was still OK, and still communicated in a generic. But, the general market of “all things computer” was starting to become more specialized as people got used to the idea of owning their own personal computers. The brand caused occasional miscommunication when people wanted me to fix their computers, as well as do training. 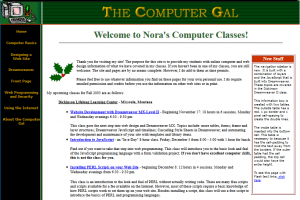 From 1999 to 2005 people, in general, became more knowledgeable about computers. As the pool of computer teachers grew for basic Computer Literacy, my teaching evolved into the more specialized direction of spreadsheets, database, and web development. In keeping with the change, my students started asking me where my website was. At some point, I realized I could no longer hide behind the excuse that I was too busy building websites to build one for myself. So, one Spring Break, I bit the bullet and put up a site.

The search for a domain name showed that ComputerGal.com was not available, but TheComputerGal.com was, so that became my main domain for many years. While I was registering thecomputergal.com, I took a chance and registered montanawebmaster.com, just in case. The second domain name remained parked for about 10 years. That means that it was registered in my name, but I didn’t point it at any website during that time.

The first site was static, pure HTML with a little CSS for text formatting only. That was 2002, and CSS did not work consistently on all browsers, so we didn’t even bother to think about using it. The site became a handy document storage place for class materials at the three schools where I taught: Flathead Valley Community College, Missoula Adult Education and the University of Mmontan. When students asked for a new copy of the handouts they had left behind in class, or lost, or forgotten, I sent them to the website. The pages included a link to a printable version without header, footer, sidebars or much color. And, when I started teaching at UM, it was a handy place for my syllabus and assignments. I didn’t have to hand out any paper at all.  In fact, my site started being viewed by instructors at other colleges who were stealing my material.

Looking back, the site design seems pretty awful, in spite of the fact that it was content rich. The colors in the frame were dark, which was a common design back then. In those days, accessibility and responsiveness weren’t heard of, but I did know something about readability and kept the text on a white background. Most computer monitors were still in the 800px or 1024px screen resolution. And, all I had for photography or art was one $10.00 clip art CD. Even then, I knew better than to steal graphics from other sites.

One of my students is a graphic artist, so he built a logo for my branding.

And, when I finished my undergraduate and graduate degrees, I moved into full time web development and web development training. Then, my brand because a confusion, not a help, so I started Montana Webmaster.