"FREE" Software: GIMP and Paint - Montana Webmaster
This article stands on its own, but is also part of the Image and Web Development Tools categories.

GIMP is a “Free & Open Source Image Editor”. Paint is the image tool that comes installed with Windows. In this article I will look at some of the basic image functions a website content manager needs to perform. There will be a few references to Photoshop as the professional (expensive) option. Photoshop used to cost around $600.00 when it was available on disk. Now it is a monthly fee depending on which parts you use. The more streamlined Photoshop Elements can still be purchased for $70.00 – $100.00.

Learning new software is generally a disruption in your workflow, especially when you have become proficient in another piece of software that does the same task because you don’t have to stop and remember the next step. But, the cost savings of using a free tool may be worth the learning curve.

The first impression I had of GIMP was surprise. It has a very professional start up screen. But, Gimp loads slowly. In fact, it almost seems like it’s not going to load at all. It just kind of Gimps along. Paint loads pretty much instantly, but it’s part of Windows.

My second impression was, “Oh, No! Another black interface.” It seems that they are trying to mimic the programmer’s command line screen. Photoshop Elements also has the same black interface. But, I figured that there was probably a way to change the interface color scheme in GIMP, and I was correct: Edit -> Preferences -> Interface -> Theme. The interface is now a light gray, but, the tools are also very light and seem to be greyed out. The seemingly grayed out tools are a bit of a UX blunder.

GIMP pretty much uses the normal tool icons, which is a big efficiency booster.

Paint is much simpler, and therefore, much more limited. All the tools are in one contextual panel under the menu.

Instead of using little dots for the image drag handles, Gimp has little squares in the corners. It can take a while to get used to, if you have used other image software with the little dots. But, then you will find that it’s much easier to target the larger area. 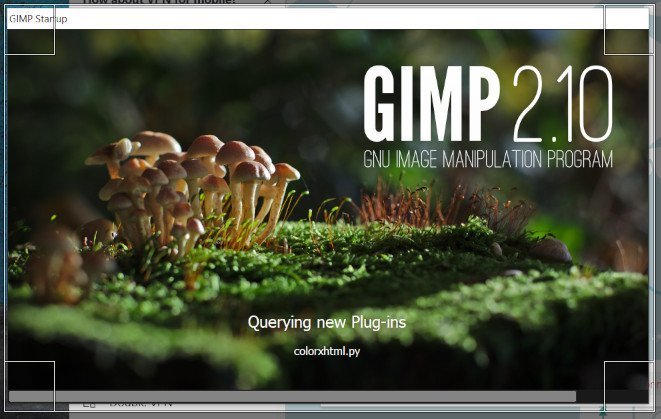 In earlier versions of Photoshop, all images started as .psd files (Photoshop Documents).  That’s because .psd files keep information about the layers, while .jpg and other file types that work for publications and the web have the layers flattened. Now-a-days, if you open a .jpg in Photoshop, it remains as a .jpg until you add something that needs to be in a .psd format to work.

In GIMP, all new images start as .xcf. And, Save doesn’t offer any other options. To save as a .jpg or other format, you have to do an Export. This can be frustrating when we are so used to the Save function. Also, the dropdown where you choose a file type is not the familiar Windows file Type window. Even after several weeks of using GIMP, I hesitate

with the way files are saved.

The GIMP cursor icon is different from other software in that it is made up of two parts.

For some reason, cropping seems to be done differently in each image manipulation program. With Photoshop, you choose the tool, draw a box and click the no smoking sign if you don’t like the box or the click the check  if you do. Then the crop is finished. 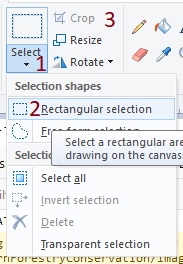 In Paint, there there isn’t a toolset, like there is with PhotoShop and GIMP. Instead Crop is a command that is only available after the Select Tool has been activated. If the last action in the program involved selection, then the selection tool will already be activated. But, if the text tool was the last tool used, the select tool has to be reactivated. Then you can draw a box with the select tool and click Crop. There is nothing that allows you to choose a very specific measurement on the crop, except eyeballing the ruler.

The cropping function in GIMP is more robust than in Paint. One feature I especially like is the ability to move and resize the crop area before you crop. This is done with a square widget on the corners that is different from any other imaging software I’ve used. The cursor icon changes.