As a website developer, I take the path less chosen: if my clients want or need to learn how to code, I teach them how to code.

When Website Systems Don’t Make it Easy to Add Pages

Many website tools, such as WordPress and other Content Management Systems, make it fairly easy (in comparison to other systems) to add new pages and do minor layout tasks. Other systems, especially those specializing in shopping cart software, have tools that are so frustrating, it’s easier just to go to code.

The Jared Caldwell, owner of Ohio Woodlands, uses Shift4Shop, formerly 3D Cart, which fits in this category.  This is a shopping cart specific web service, similar to Shopify. Testimonial Pages are an important part of his website, but it’s just quicker to build them in code that to use their WYSIWYG tool. Over the years, I added new testimonial pages, but now he is interested in doing that task himself. So, we will have a little HTML lesson!

Most of the work to build a webpage is done in the body area. So, the following instructions will assume that the <body> </body> is already there.

There were two choices of structures (tags) for Jared’s Testimonial pages, 1) layers and, 2) lists.

What Is a Layer? 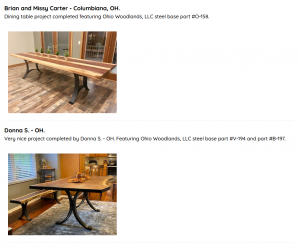 If we use the layer option, we would use  <div></div>. Each <div> </div> would contain a title, a description and a photo.

A list is repeating information. Traditionally, a list is for short phrases or words, such as a shopping list, but lists on websites often contain larger pieces of content that are all in the same topic and format.

The code for lists can have other elements inside them.

Quite often, as in this case, you can also add CSS code that will make the bullet or the number not show. Notice on the screenshot that there are no numbers next to the title on each of the testimonials in the screenshot. No matter how the viewer sees it, the structure is a list. CSS is a totally different language from HTML. HTML adds elements to the page. CSS formats those elements.

Notice that the second and third line inside the <li> have <h2> and <h3>. These “h tags” help show the information hierarchy of the site. There is also an <h1> tag on the page, but each page should only have 1 <h1> because it is the title of the page. It signals to Google what the page is about.  For this page, the <h1> is on the title: 2020. So, the title of the individual testimonial, and the further information about the source of the testimonial are in <h2> and <h3>, showing the hierarchy of the content.

Paragraph tags <p></p> mark a basic paragraph. These tags tell the browser that this is basic text content. In the case of the image <img>, I also put a <p></p> around it because the Shift4Shop coding sometimes adds unwanted additional code around images. The simpler the code, the easier it is to manage and the less likely it is that there will be additional problems.

Unlike the other tags that have an opening and a closing tag, such as <h1></h1>, images have a single tag that has all the pieces as property. There is no text to add between an opening and closing tag. Instead, and image tag has the <img, which tells the browser that it needs to load and image address, in this case “https://www.ohiowoodlands.com/assets/images/2020/NewYorkTableLegsProject.jpeg”. The image address is a “property. The src is the name of the property.

Note that normally, you don’t add <p></p> around an image, but in this case, it’s there to overcome a peculiarity of Shift4Shop. It’s not uncommon to have to work around idiosyncrasies of a technology.

The Basic Structure that Holds a Web Page Together

With systems like Shift4Shop, the site owner or developer adds only the code that goes into the content area for that page, such as a testimonial.  The full code has a basic HTML structure around that specific content. Knowing that structure doesn’t help the task at hand, but here it is, as a matter of interest and for other technologies where you do need to add it..