Companies That Use LinkedIn for Cold Calls - Montana Webmaster

ROGUES GALLERY: Companies That Use LinkedIn for Cold Calls

The following are my response to companies who abuse LinkedIn by having sales people to connect with me, only to send me a sales message. 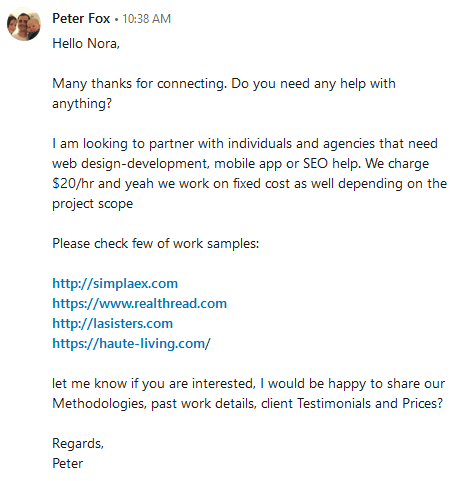 The text is getting better. Not good, just better. A little bit less like a full blown advertisement. But, this one really blows it on the security issues. Never, never, never put the photo of a small child on social media, unless they are a generic model that can’t be easily located. Of course, this photo could be stock photography, so maybe the children are actually models.

In a recent class, a student brought up the issue of how much he hates it when people try to connect with him and then give him a sales pitch. My student is very nice about it, but he mentioned that he has a friend in another state that has a rogue’s gallery like I do. Bummer, I thought I had a new and innovative idea.

If Mr. Wilson had done his homework, he would know that I believe that web development should be a transparent process. That means that the client should be able to talk to the folks doing the work. That means that the folks doing the work, need to be available. And, if a company is charging $25.00/hr for development, you can bet they are using off-shore developers. 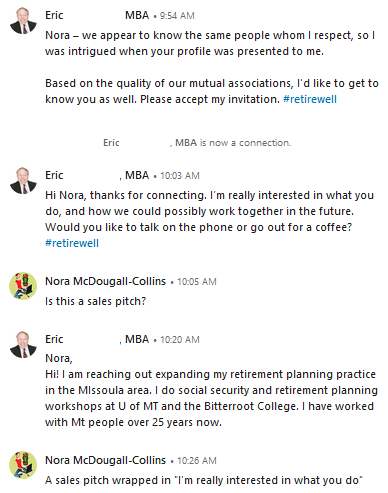 I wonder if I am now one of the “same people whom I respect”. But, at least he says the right words before the sales pitch.

Do your Homework First 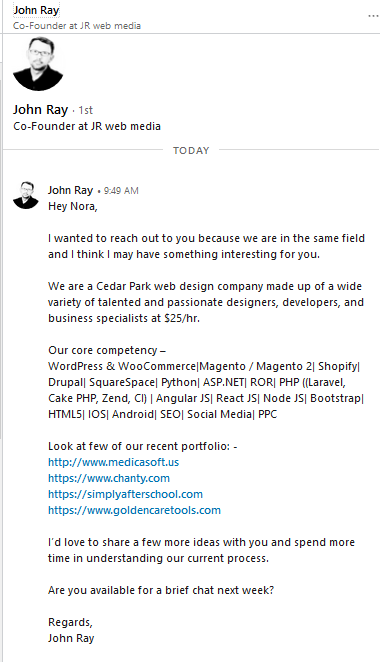 Cold calling without checking the companies you are contacting is just plain lazy. For example, this LinkedIn connection cold call that came in a couple of hours after accepting a connection request shows that John Ray did not do any checking into what I do. That means that he is not into connection, he is into cold sales. If he had checked even my LinkedIn profile, he would have known that I am a developer.

I wonder if John is one of those guys who really don’t know anything about development and use off-shore developers. 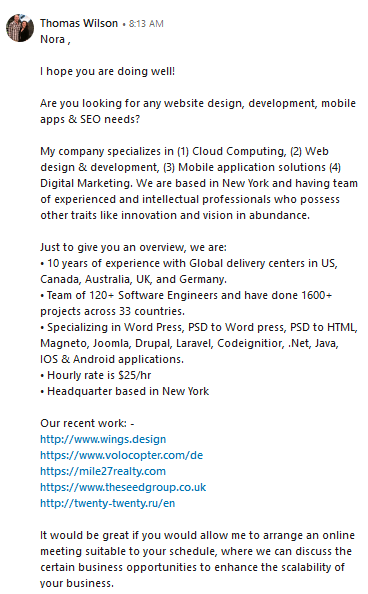 If you would like to help someone overseas have work, there are ways to hire them directly. Former student and client, Steve Weber found a developer in Pakistan through Freelancer.com. Initially, Freelancer.com was taking a commission on the work, but over time, Steve and the developer were able to work through the language barrier to form a business relationship directly. This way, the developer and his family are able to gain the full value of his work. 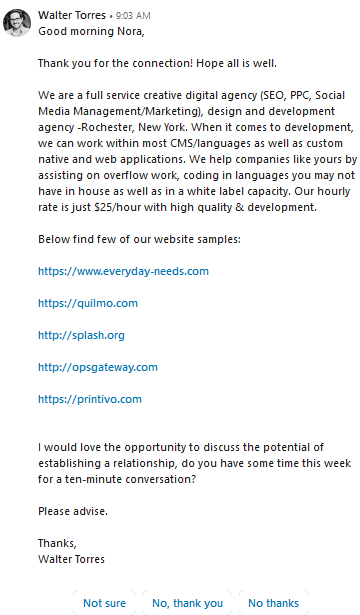 What differentiates this LinkedIn cold call from the rest? One item is that they give their pricing. That is either a temporary price, or they outsource overseas, or both. Or, they have their developers chained in the basement as slaves.

Here is a new twist! A badly written demand that showed up in my email today. 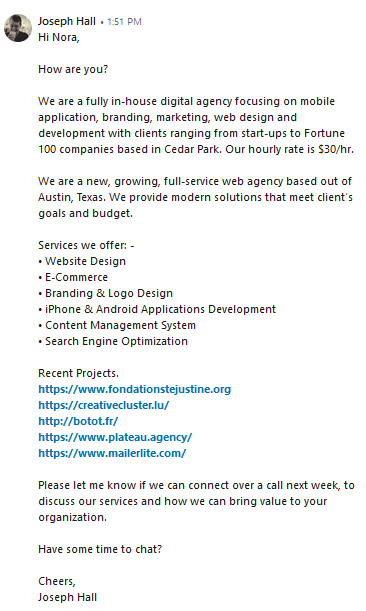 Sometimes it’s hard to tell the sales guys apart. I’m not sure I can tell this Joseph from the last Joseph. They look alike and write alike. One way

they could be different is to not send ads. There are actually other ways they could communicate, but I don’t want to stifle their creative juices by telling them how to make friends. 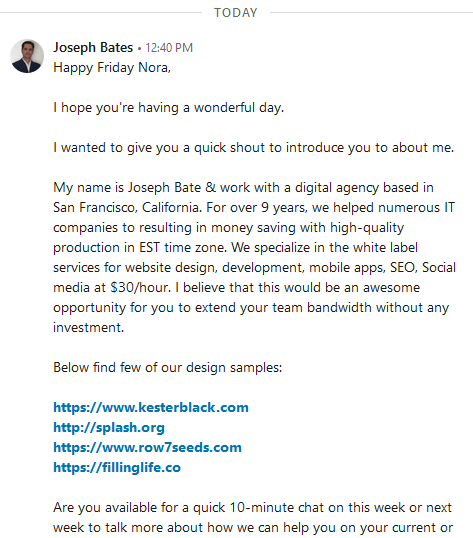 All the right beginning words! So, casually friendly. So, tacky.

So, if you want to get to first base, show some interest in something besides yourself.

I hope you have a wonderful day too, Joey.

This one is really tacky! But, they get points for a new twist I haven’t seen before!

Who wants a sales pitch as an anniversary present. The best place for this is just a general LinkedIn post or article.

Please tell your people to stop using LinkedIn for cold calls. Instead, encourage them to build relationships.

The reason that this doesn’t show a person in the image by “Hi, Nora” is that I unconnected him before I took the screenshot. In the future, I will take the screenshot first!