Are the Articles and Reviews True? - Montana Webmaster

Are the Article and Reviews True?

Most Companies don’t Have Reviews as Bad As These

Yelp is a site I have mostly used to check out or review restaurants, hotels and rental cars. But, recently, I was researching the Hibu internet marketing company and found a review page about them on Yelp. I’ve only had one experience with Yelp where the reviews were even as close to being this bad, yet the first review was short, but a glowing 5 stars. There seemed to be a total disconnect between this review and the rest of the comments. Looking further down the list uncovered some very odd patterns.

When I looked up the other reviews by the first … 5-star … reviewer, Mark J, I found that almost 100% followed a pattern, 5 star written  with few specifics. The whole thing seemed very odd. So, I decided to do some research about fake reviews, using the Hibu company as a case study.

Since that first look, Mark J’s account has been removed by Yelp. I wish they would have waited until I finished taking screenshots.

But, I soon found another reviewer that followed the pattern of all or almost all 5 star reviews. And, since then, it seems that Hibu has a stack of these. So, is Wayne T’s review fake, or is Wayne just one of those people who have to say something nice about everyone?

The Importance of Credible Reviews

Many people rely on review sites, such as Yelp, when looking for products or services. But, do those reviews reflect a  true experience with the business or does the reviewer have some other motive? Alternative motives, such as being paid, could lead a reviewer to post either positive or negative comments that are pure fiction. Besides being a concern to viewers, the accuracy of the reviews is a headache for credible review sites.

Even the best of companies isn’t perfect and a viewer should expect to see a legitimate bad review or two for the best of businesses. And, some negative reviews will be from from troublesome clients that are going to treat high quality staff badly. Taking the possibility of fake reviews into account makes you wonder whether it’s worth the time it takes to read through a set of reviews.

My research showed that some review sites are much more credible that others. Neil Patel’s article, linked in the pullout, says, “BrightLocal’s study shows that Facebook and Yelp are the two most-trusted review sources for local searches. Google comes in third.”

While the ability to spot a questionable or fake review can save you the expense of a bad dinner or a bad night in a hotel, it’s even more important for business owners who need technology services. It’s important enough that there are studies done about what indicators you can look for to spot fake reviews, including this article from Inc Magazine.

To use a detection process based on documented patterns, the article lists three suspicious patterns of fake reviews:

One of the issues the article brings out is that people are generally not very good at spotting fake reviews. Part of the problem in searching reviews for a technical service is that people often don’t know enough about a technology to know what makes a good company. For example, sometimes people call me a web designer. I don’t do graphic design work. I am a lousy graphic artist. What I am is a developer. So, I should never come up under the web design keywords, but most people don’t know that. Let’s pursue the idea of using review sites to find a web development company, which may include designers and developers.

To put the review by Mark J into a bigger picture, I pursued two types of sources: 1) articles by people in the industry, and 2) general review sites.  Let’s start with articles by web professionals. There are an alarming number of developers writing about Hibu. We do have to take into account that they, like this article, are discussing a potential competitor.

These the articles are pretty old, and a simple Google search did not bring up any more recent articles. But, they are a starting place for comparison of the comments in Yelp. For one thing, we would hope that the bad practices listed from 2014 / 2015 would have been correction.

“If a business has been accredited by the BBB, it means BBB has determined that the business meets accreditation standards, which include a commitment to make a good faith effort to resolve any consumer complaints. BBB accredited businesses pay a fee for accreditation review and monitoring for continued compliance and for support of BBB services to the public. ~ https://www.bbb.org/north-east-florida/for-businesses/about-bbb-accreditation/

“You fulfill all contracts and promises made through business practices and advertising ” ~ https://www.bbb.org/why/requirements.php

The first two articles go together and list some very common bad practices:

On #4, I checked the Hibu site that was reviewed, and even 5 years later this is true. Because I have no personal, first-hand experience with Hibu, I cannot verify that the first three items are accurate about Hibu, so let’s look at the reviews for comparison.

Based on what developers have said about Hibu, we would expect to see quite a few negative reviews of the Hibu Web Development company. The results of three review sites: BBB (A+), Consumer Affairs (4 stars) and Yelp (1 star) were so different, it fits in nicely with the topic of this article. Hibu does better on sites where you can pay to be a member. The 2016 article linked in the pullout mentions that Hibu has a 1 star rating with Consumer Affairs. Now it has a 4 star rating. Has the company drastically improved the quality of its service, or are other factors at play?

Hibu is also listed as an accredited BBB business and they have an A+ rating on the Better Business Bureau website.

The reviews in Yelp are very telling. When I first started my research, they had 93 reviews. I set up a spreadsheet to try to analyze the comments, and I broke down 87 of the reviews, taking them in the order that they show on Yelp with the default sort. In that line up, 83 were 1 star, 1 was 3 star and 3 were 5 star.

As I was nearing the end of documenting the reviews, I noticed a little link at the bottom of the pages and saw that there are 150 reviews that are “not recommended”. Between new reviews and the Yelp algorithm, the number of reviews there will be is fluid, but so far the trend of stars isn’t. One 5 star review at the top and approx 96% are 1 star. 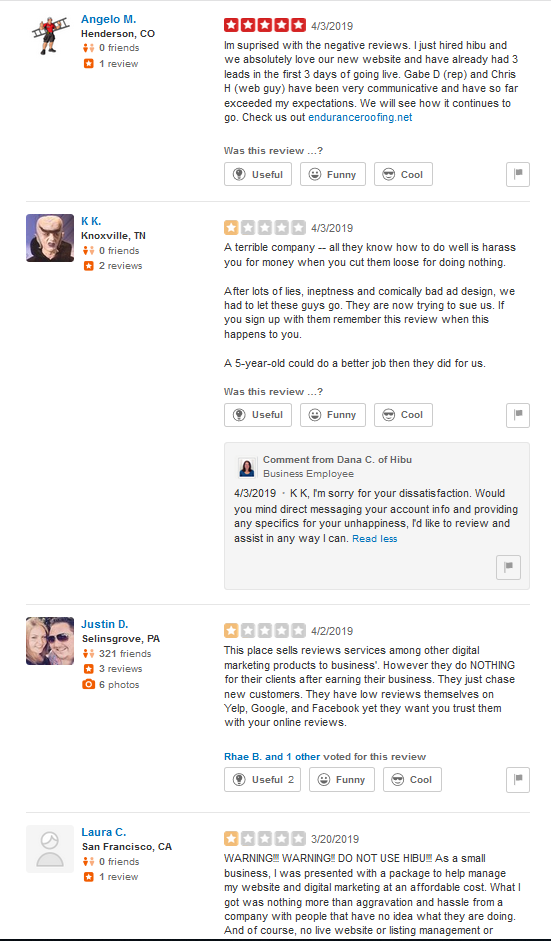 Most of the 1 star reviews are very specific … and lengthy … about their problems. As the clues about fake reviews state, the 5 star reviews do tend to have “I” and “me” and lack detail. In fact, over the several weeks I have been doing this research, all  of their 5 star reviews have about this much detail.

When I broke down the reviews, I found clear patterns in the comments: 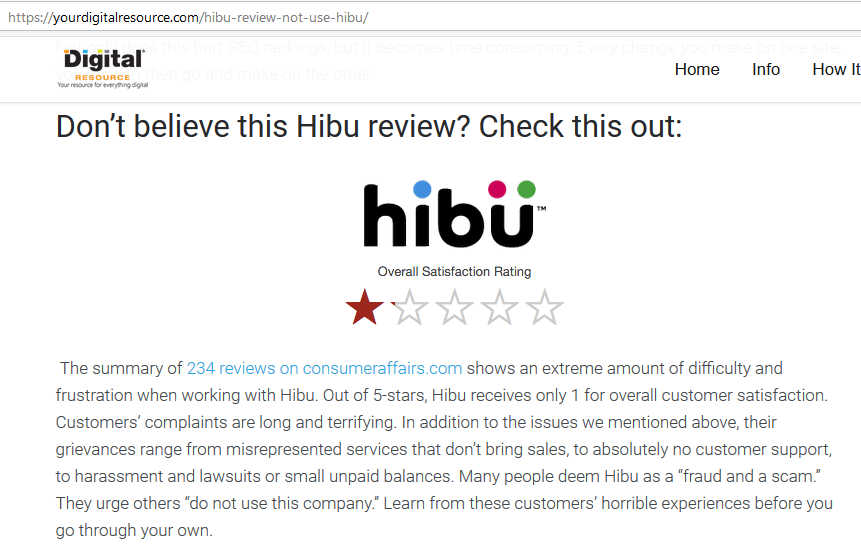 The “10 Secrets …” article listed in the pullout, mentions that contacting reviewers is a good way to test whether they are legitimate reviews. The article says, “When in doubt, reach out. “Reach out directly to the reviewer with questions about their review. Most fake reviewers will not respond, but real reviewers often look forward to opportunities to be more helpful,” says Lai.” I think that I will give that a try!

I have contacted 4 reviewers: 3 gave 1 star and one gave 5 stars. I only contacted reviewers with websites . The existence of a website can be confirmed without releasing confidential business information.  I started my contact by asking them to share the URL of their website. Two of the 1 star reviewers have replied. Both have moved on to other developers. 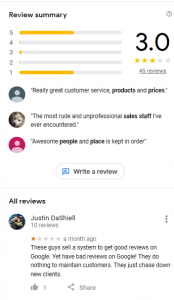 One of the articles linked above suggests checking out Facebook and Google Reviews about Hibu. The Hibu Facebook page looks like it has had quite a bit of  “reputation management” done, but I don’t see any reviews. Google lists 45 reviews. Like Yelp, the reviews are very polarized with mostly 1 and 5 star reviews.

There is no doubt that reviews cannot be taken at 100% face value, but there is value to review sites. And there are types of review sites that are more credible than others. For example, sites that collect membership fees, including the Better Business Bureau, have a conflict of interest.

The fact that they give Hibu an A+ rating when there are so many unhappy customers is not helpful to their credibility. Yelp, as well, makes their revenue from ads from the very businesses that may have reviews.

One missing factor in all the review sites is a link to the websites created by Hibu for a quality of code check. One of the earlier articles I read mentioned that Hibu kept changing platforms. Now it seems that they have a website builder, like Wix or Weebly. But, some of the reviews mention that Hibu built their site. Maybe part of Hibu’s problem is that they just trying to provide too many, diverse products. There are details behind the dissatisfaction that goes beyond the skill set of the average digital marketing client.