Take the marvelous web service called Shopify as an example. Relative to similar products, it’s a great tool. But, there are limitations to the greatness! One of the limitations is that you cannot add extra fields you need into their system. If you have a self-hosted WordPress site, you can add any tables and fields you want to the database. One reason is that if you cause WordPress to break with your tinkering, it only affects your site. If you mess it up with Shopify, it would cause problems for all the Shopify site. That is because all Shopify sites run on the same piece of software.

All my client, Ray Holes Leather Care, needed was a form where a viewer could choose whether they want to ask a question for the retail department or the wholesale department. This is a multi-generation, family business where retail and whole are handled by different family members. The first question is, does the base technology have a Contact Us form?

WordPress doesn’t have a default Contact Us form. But, there are quite a few wonderful plugins to do that task, such as Gravity Forms and Ninja Forms. The best WordPress form plugins send viewer responses to both your email address and into the database so you can see them in your Dashboard. This is very important if you have a technical problem with your email. 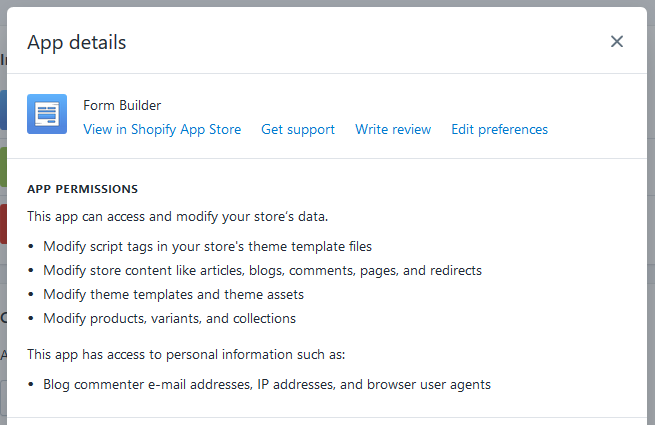 Shopify does have a default Contact Us form, but Shopify does not have a place to store responses to your form. It only has send capability to your email address. Shopify doesn’t have “plugins”, but it does have “apps”. In order for an app to store form response data, that app would have to store it on another server somewhere. That means that an additional piece of software has access to your viewer data. In fact, one of the Shopify apps states that it has access to all your data. At least, it does give you access to what it’s storing.

In this example, differences in the way that data is stored makes all the difference in the world!

Monthly Charges for Every Little Feature

In trying, to make a form where there is a choice of sending submissions one of two different ways, I also ran into problems. Apps that have this function have a monthly charge. This is reasonable, not only do the developers need to be paid for their work, but the fact that they also have to have a system to store the data adds to their own costs. And, for my client, that means that their monthly website costs would almost double for the one little feature.