Why Are There Unexpected Plugins in my WordPress Install? 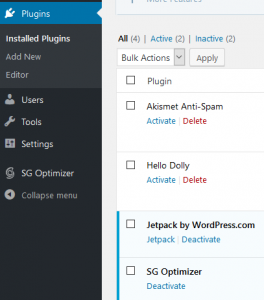 One of the steps of setting up a new WordPress site is to check the default plugins that come with a WordPress install.Some of the plugins, such as Akismet, will be from WordPress. Others will be from the install tool that your web host may provide. Why are they there in the first place?

Only a very few plugins actually come from the owners of WordPress (Automatic). This is discussed in the next section.

What Should I Do About the Unexpected Plugins?

The plugins need to be considered individually. Be sure that you know what those plugins do and whether you will be replacing them. Here are the plugins that came with my install for MontanaWebmaster.com

1. Akismet: I have yet to see a WordPress install that did not include Akismet. It costs $60.00/yr and will help keep your comment spam cleaned out. Generally, I don’t activate it (pay) until comment spam becomes a problem.

2. Hello Dolly: This plugin is not showing up as frequently now, It is just a test plugin to show you that you too can create a plugin. I always delete it. In fact, when I start work on an existing site, if this plugin is there, I know that I will need to check the site for other detail work that hasn’t been done.

3.Jetpack:  I ALWAYS get rid of Jetpack. It’s a resource hog, although they have made significant improvements over the years. I tell my clients it’s like buying a ShopSmith because you need to cut one board. It takes up a lot of space to do a ton of things you don’t need. It’s best to find plugins that specialize in the tasks you need.

4. SG Optimizer: I will keep this one. Most quality web hosts have server caching to help your site load faster (good for your SEO). But that same cache can cause your child theme changes not to show up when you look at the site. Many hosts offer their own plugin that allow you to clear that cache when you make design changes to your site!

While plugins that show up in the initial WordPress install are annoying, they are generally not a threat. Web hosts don’t want vulnerable plugins on their servers. Theme writers, on the other hand have no skin in whether the plugins they bundle with their code are vulnerable or not. An example is the Revolution Slider / Rev Slider / Slider Revolution fiasco that started in 2014. Many themes bundled this plugin with the result that over 100,000 sites were compromised within a few months.