The theme has a small site title and tagline in the row above the slider, but the name is very small (see asterisk). That would make sense if I were going to use the business name in large text on the slider images, but I’m not. So, I need to rethink the size of the branding information in the top row!

It’s easy enough to make it larger with a simple CSS change. I already have a  Kahuna child theme started for another change.

How Did I Change the Font Size? 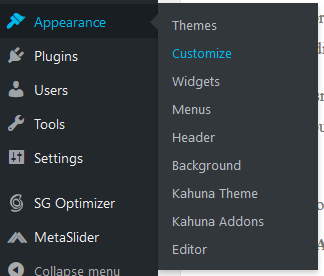 Since WordPress added the Customizer function in 2015, themes have been adding new areas that can be formatted through the Customizer. So, the first step is to check whether changing the formatting of the site-title can be done in the customizer.

An aside: Changing formatting in the Customizer puts that code in the database, instead of in your style sheet. For that reason, I often do those changes in code to keep my stylesheet the authority source for formatting.